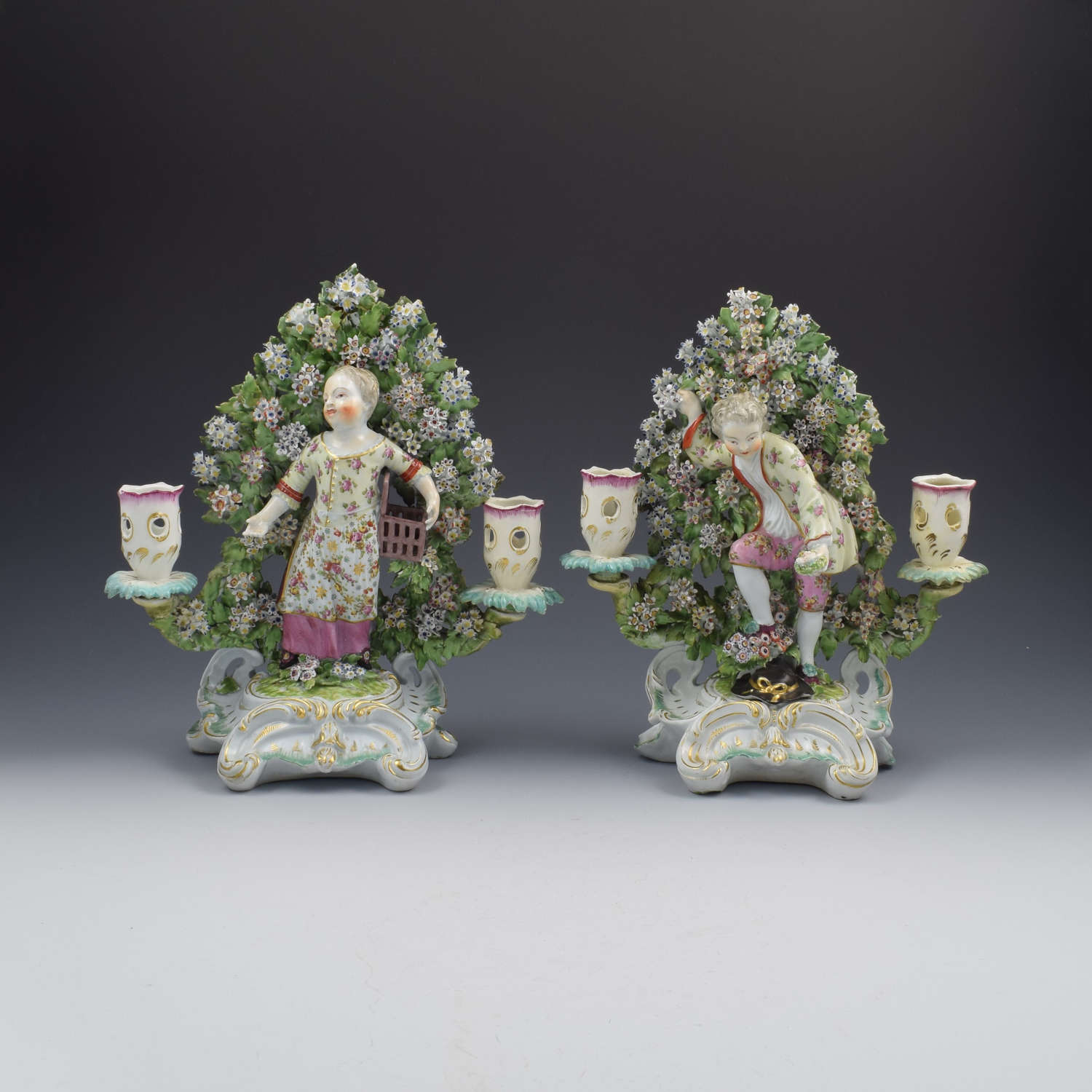 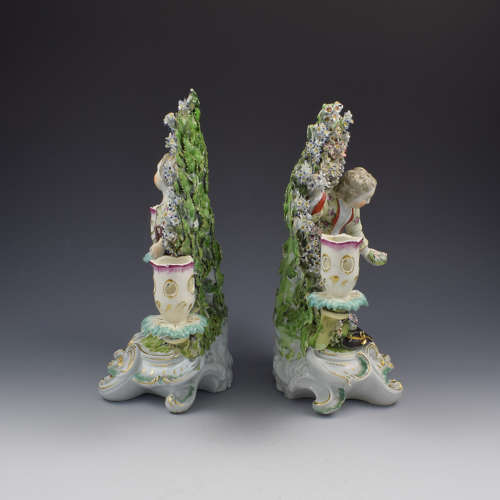 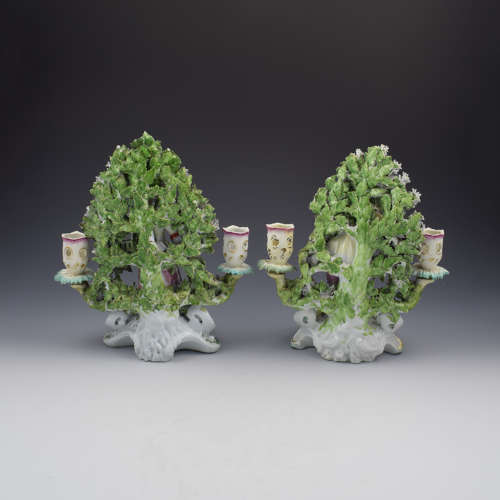 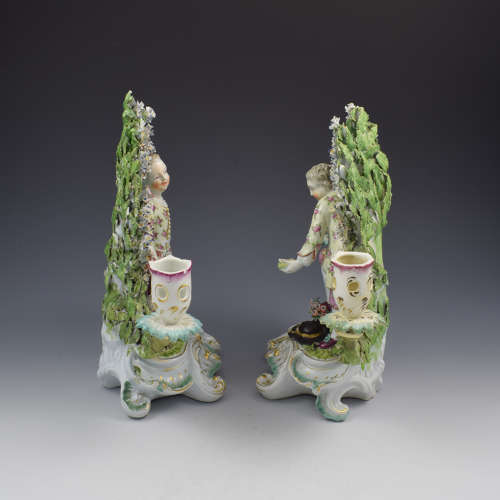 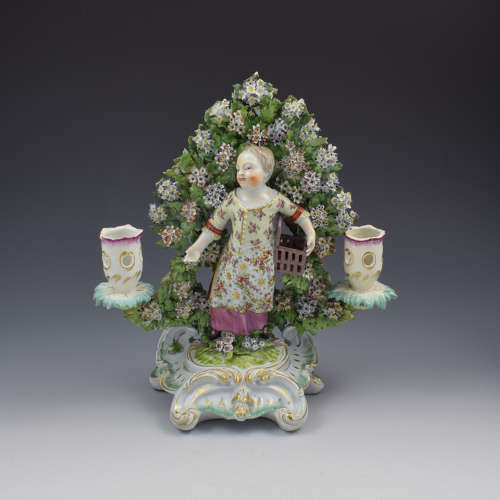 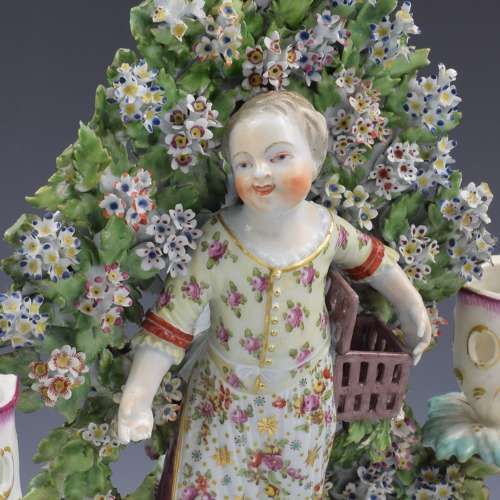 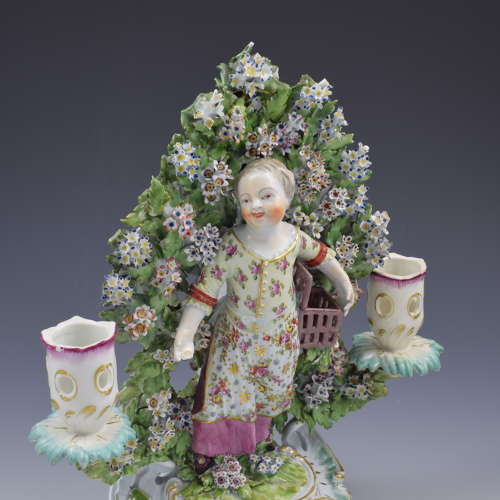 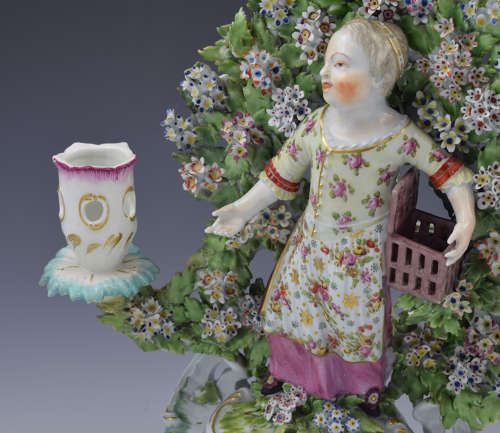 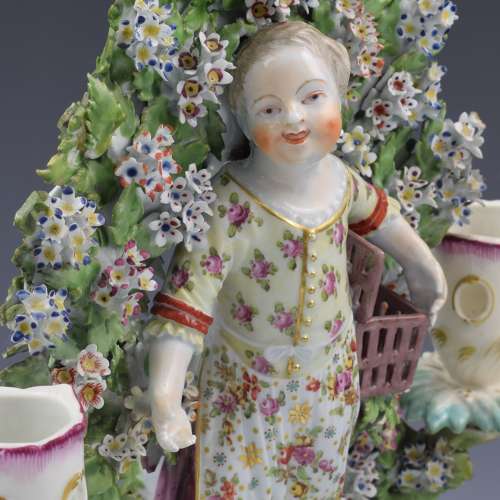 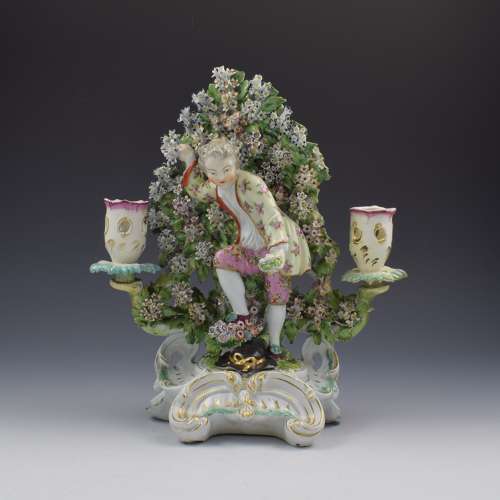 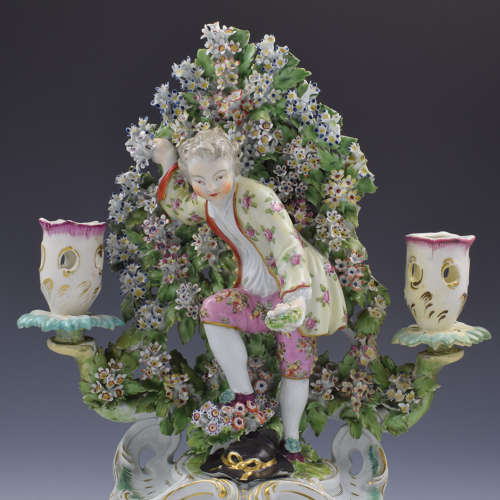 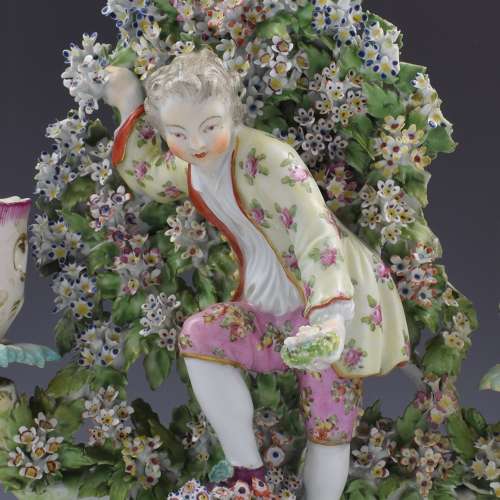 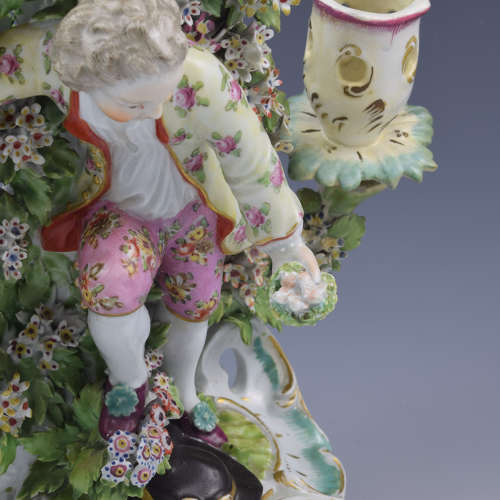 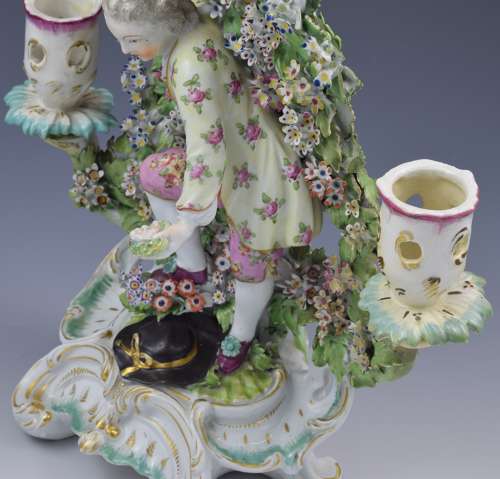 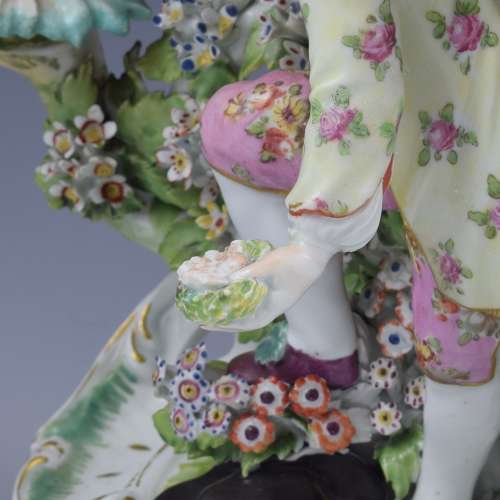 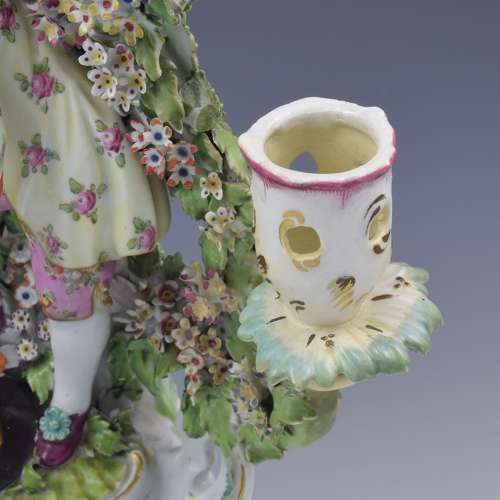 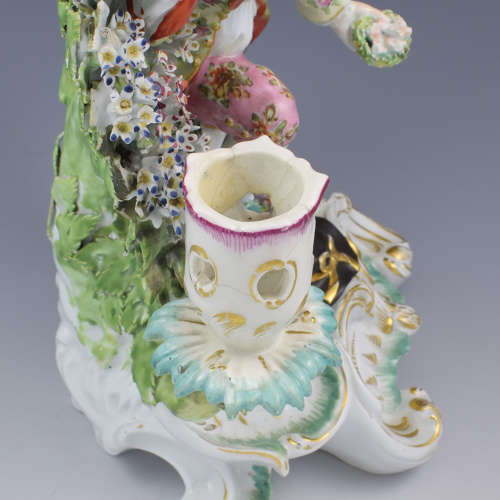 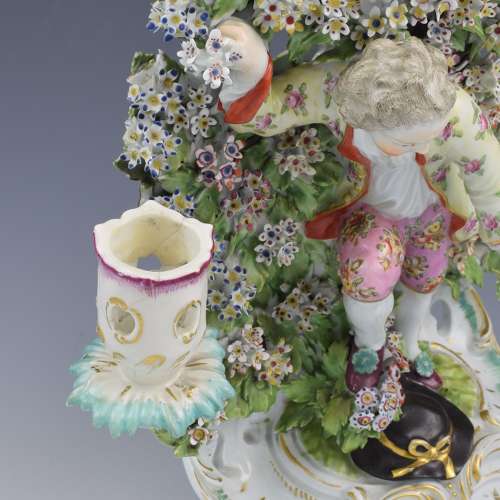 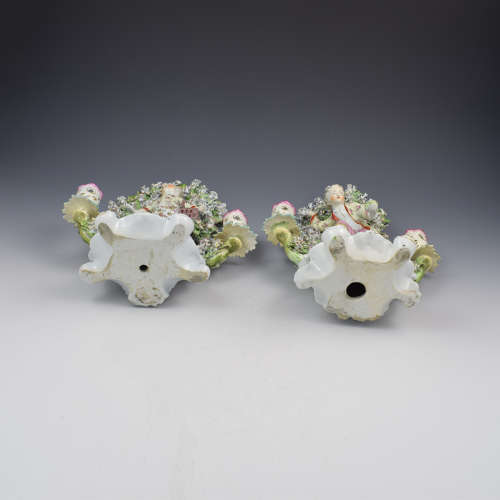 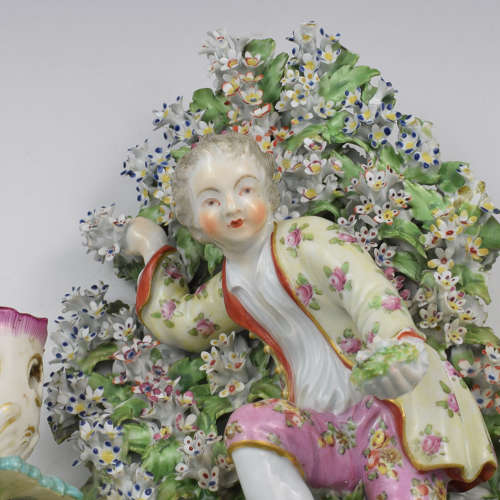 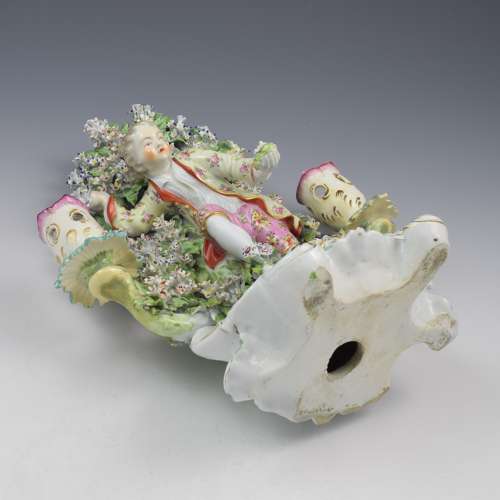 A good and rare pair of Derby figural candlesticks, featuring two children representing Liberty & Matrimony. They have double candle sconces, stand on scrolled bases and are set against large floral bocages. The girl as Liberty holds an open bird cage against her side and looks wistfully off to the side. The boy leans forward offering a nest of chicks in his outstretched hand, representing Matrimony. Patch marks to base, c.1765-1770.

Reference: Derby Porcelain by John Twitchett, plate 62. They do not feature in Bradshaw where only two versions of Liberty & Matrimony are discussed, a pair of standing young adult figures, and a pair of reclining adult figures, sometimes with candle sconces.

Condition is very good with a few minor points to note:
Liberty has had a small amount of professional restoration to her right hand and a very small chip to the rim of her right sconce.
Matrimony has had a good repair to the wrist of his left hand and the chicks have lost their heads in the nest. His left sconce has had some repair and professional touching up and there are some hairlines to the right sconce also which has been reattached underneath.
The work to the hands has been done very well and the work to the sconces has also been done carefully and is minimally detracting. The necks are fine as are the bases. A few very minor losses to the bocages but very good for this type of decoration and mainly just to the tips of the leaves around the edge of the bocage. There is a short firing line to the reverse of Liberty's base.
Surface wear is very light, the enamels are good and bright. There is the odd craze line here and there.